Understand Your Right To Protest 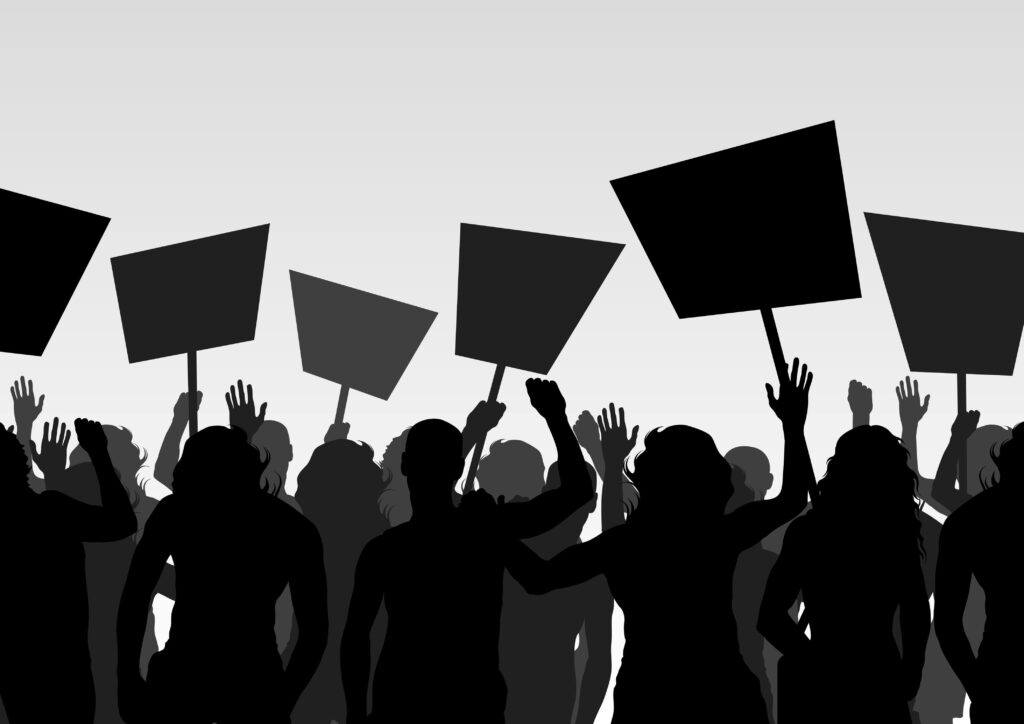 Protesting is one of the sacred rights citizens hold from our laws in the United States. It has been a part of this country from the very beginning. In fact, many of the stories in U.S. history are about protests. Everyone knows about one of the most famous protests in early America: the Boston Tea Party.

Many changes have happened because of protests. They can be a powerful tool the people can use to make things better and make the government address issues.

The issue with protests is that there is a fine line between what is legal and what is not. A protest can easily become illegal if you don’t understand your rights. If you face legal trouble due to participating in a protest, you must hire an attorney who understands your civil rights and can help show you were within your rights to protest.

You have the right to protest afforded to you in the First Amendment to the U.S. Constitution. This amendment guarantees you the right to assemble. The Founding Fathers felt this was so important that they included it in the Bill of Rights.

They also ensured that you retained this right by prohibiting the government from making laws that infringe upon this right. However, it is not an absolute right. The U.S. Supreme Court has ruled that the government can make laws regarding protests that serve the public interest.

Protest and anti-protest laws typically focus on time, place and manner. For example, laws often impose a requirement that you must get a permit before protesting. You can find these laws at every level. They may even vary from city to city.

Before you can understand protest and anti-protest laws, you need to understand the definition of protest. Protests can include:

The point of a protest is to voice opinions. They allow you to show your opposition to something in a peaceful manner and are an excellent tool to use when someone else holds the power to make the change you want to see.

Your right to assemble is allowable only when that assembly is peaceful and does not cause harm to the public. If your protest crosses the line, it is likely you will break laws.

States and localities have laws that restrict the right to protest. Most states do not have specific anti-protest laws, but they do have laws concerning details that impact your protest rights, such as limits on areas where you can hold a protest or requirements for you to secure a permit.

There are three situations in which your protest may go from legal to illegal:

Unlawful assembly is when three or more people get together and disturb the peace. This might happen if your protest becomes too loud or if people are starting to act in an unruly way, such as not listening to law enforcement orders.

A riot is when your protest turns violent. Your rights to assemble under the Constitution do not extend to situations where you harm others or damage property. You lose your rights once you infringe on the rights of others to live peacefully.

Civil disobedience is a form of peaceful protest that involves breaking the law. You do not have protection for such a protest even though it is peaceful because of the aspect of not complying with the law.

In general, a protest becomes illegal when it involves anything that negatively impacts the public. Your protest rights do not include situations where you:

Many localities also have permit laws regarding protests. In general, you do not need a permit if you will be on public property and not blocking other people from traveling roads and walkways. If you want to be on the road or take over sidewalks, then you will need a permit in most places. Not having a permit when the law requires one also removes your right to protest.

While there are situations where you do not have the right to protest, when you are legally protesting, there are many ways others can impose on your rights. Often these infractions occur when you clash with law enforcement.

Law enforcement officers cannot tell you to disperse when you are protesting and there are no issues with unlawful assembly or rioting. They also must give you adequate time to disperse and state an exact time limit by which you must shut down your protest before officers take action against you.

Sometimes issues arise from permits. It is up to you to know when you need to get a permit, but the city or locality cannot deny you a permit because of bias against your views or the subject matter of your protest. In addition, if you have a permit, then law enforcement must honor it.

If you have concerns that someone violated your right to protest, then you need to consult with an attorney who specializes in civil rights. Because there is a confusing boundary between what is legal and what is not, it can be tough to know if you even suffered a rights violation.

Your attorney can assist you with understanding the law and help you to file a lawsuit if you did suffer a violation. In addition, your lawyer can ensure that you hold people responsible for denying you the right to protest or illegally interfering with your protest.

You may even benefit from securing an attorney prior to holding your protest. Your attorney can ensure that you follow the law and remain legal throughout the protest and protect you from any legal recourse that anyone might try to take.

If you have questions or concerns about your right to protest, anti-protest laws or other legal issues involving your right to assemble, then you need to speak with an attorney immediately. Submit a request online or call us today at (866) 345-6784 to get in touch with an experienced lawyer in your area!