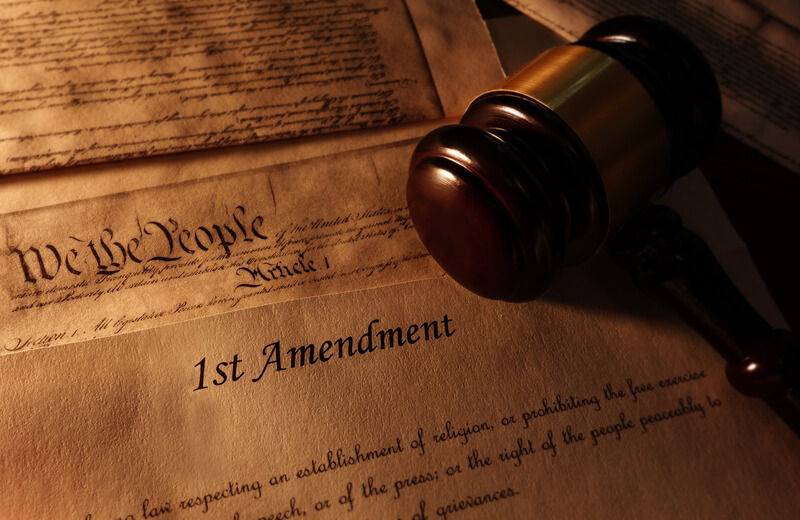 The First Amendment deals with arguably the most sacred tenets of the U.S. Constitution. The rights to free speech, assembly and religion continue to spark debate about how far these entitlements can extend.

Any page in an American history book has a moment where we had to wrestle with these topics listed in the bill of rights. Moreover, these debates from the past continue to influence how we approach the stormy present.

5 First Amendment Cases Everyone Should Know

Examining precedent is essential when you want to ask crucial questions about your civil rights, or sue to protect them. Accordingly, we offer five First Amendment cases everyone should know to bolster their argument.

The story of Cox v. New Hampshire started in a hall in Manchester, NH on July 8, 1939. This location is where Jehovah’s Witnesses gathered to march down the streets and hand out pamphlets. However, the municipal court handed down convictions for organizing an unlicensed parade since they did not have a permit.

This event created a fundamental question about our first amendment rights in America. Therefore, making it one of 5 first amendment cases everyone should know. It begs the question, does requiring a permit restrict our ability to assemble and speak freely?

The Supreme Court delivered a unanimous decision on this issue. According to their ruling, the government can restrict the time and place speech occurs in the interest of public safety. The messaging cannot become subject to regulation, but a gathering of individuals needs to happen in a safe and organized way.

Texas v. Johnson centers on the events of a sweltering day in Dallas in August 1984. As the Republican National Convention unfolded, a protestor named Gregory Johnson burned an American flag. The police arrested him under a Texas statute, and a court convicted him for desecration and inciting anger. Johnson’s appeal insisted that his actions represented “symbolic speech” and had protection under the first amendment.

A slim majority (5 – 4) of the Supreme Court agreed with this assertion. They justified this decision by stating that finding something offensive does not justify suppressing it. In essence, if burning a flag in reverence has protections, the same principle applies to protesting.

This decision remains controversial and active in civil debate and protests in America. Notably, Gregory Johnson and 21 others faced arrest for burning a flag again in 2016.

Tinker v. Des Moines has its roots in the turmoil of the Vietnam War. A group of students planned to wear black armbands to protest America’s involvement. Despite a warning from the principal not to take this action, they did so anyway and received suspensions.

The parents of the disciplined children responded by suing the school district. However, the U.S. District Court for the Southern District of Iowa ruled against them. The jurists who adjudicated the case asserted that protest that disrupted learning was not justifiable.

The Supreme Court overturned their decision by a 7 – 2 margin in February 1969. The majority justified their conclusion by asserting that our rights do not disappear when we go to school. The dissenting opinion focused on the fact that everyone does not have the right to express an opinion whenever or wherever they want. Still, this is one of 5 first amendment cases everyone should know.

You may have heard these words in an old television show or cartoon. But, you may not know that they get to the heart of a central debate about the first amendment. Chaplinsky v. New Hampshire is the landmark case that helped settle whether the U.S. Constitution allows speech meant to incite violence, or a fight.

Once again, this legal argument started with an incident between a Jehovah’s Witness and a city in New Hampshire. Walter Chaplinsky managed to gather a crowd around him while distributing pamphlets among locals. When police intervened, he cursed at the officer who arrived on the scene and called him a fascist. These actions resulted in his arrest for violating a law banning offensive language.

Once his case reached the Supreme Court, they voted unanimously to support Chaplinsky’s arrest and conviction. Justice Francis Murphy wrote the majority opinion that expressed their reasoning. In their judgment, language that constitutes a “breach of the peace” does not have protection under the First Amendment. This ruling set a new precedent for free speech, making this one of 5 first amendment cases everyone should know.

Schenck v. United States dealt with an issue that continues to create controversy while America is at war. During World War I, the Socialist Party sent literature to soldiers claiming the draft violated their 13th Amendment rights. These actions resulted in criminal charges under the Espionage Act of 1917.

Their appeals made their way to the Supreme Court and changed how the first amendment applies during a war. Furthermore, it established the now famous standard of “clear and present danger.” This justifies why it is one of  5 first amendment cases everyone should know.

There was no ambiguity in how the highest court in the land adjudicated this case. They upheld the convictions in a unanimous vote. Consequently, this precedent continues to justify that inciting insubordination in the military is illegal.

Speak to an Attorney About First Amendment Cases

Did the details of these 5 first amendment cases everyone should know connect to a situation you encountered recently? Do you believe that your right to free speech became, or could be suppressed?

While these Supreme Court cases represent landmark moments in U.S. law, our constitution is a living document. Asserting your rights in a local courtroom could change how we all think about the Bill of Rights. If you feel prepared to explore the potential of First Amendment lawsuits, send a request through our website or call (866) 345-6784.