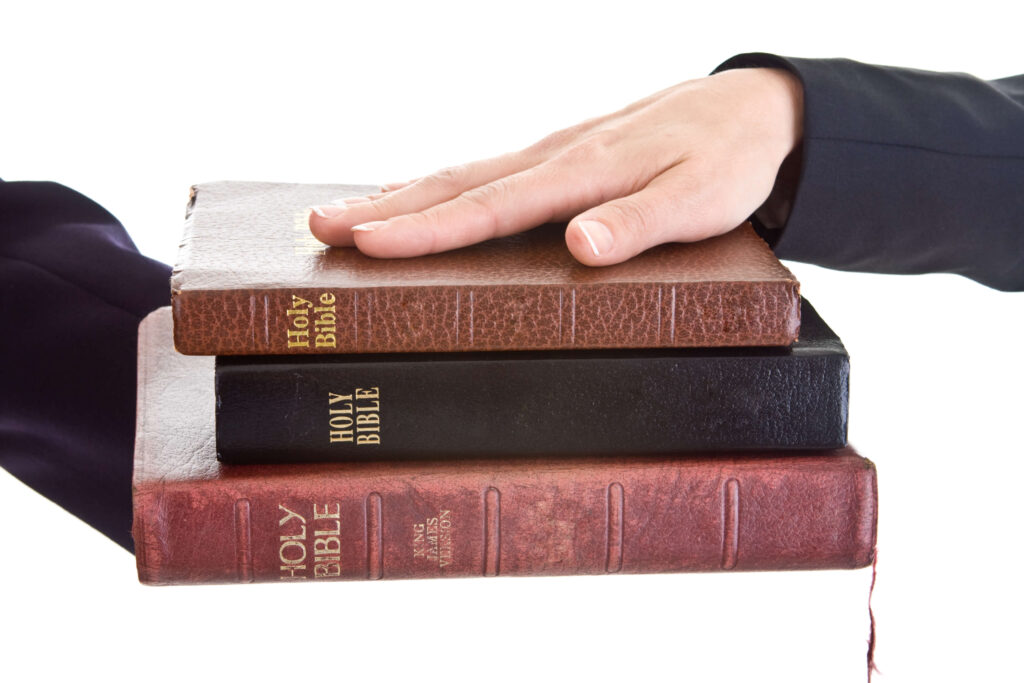 You have heard it before and will likely hear it again: “I swear to tell the truth and nothing but the truth…”. This statement is uttered in courtrooms across America by individuals who are called upon to testify or give a statement in court. Judges and jurors base their decisions on any statements uttered thereafter. As a result, the justice system does not view untruths as merely “lying”. Rather, it considers them a crime — the crime of perjury.

Perjury refers to the criminal offense of lying under oath. The law classifies it as a serious crime because it derails the very purpose of our justice system, which is to discover the truth. If you commit perjury — or, in legal speak, “perjure yourself” — you face serious consequences, including criminal prosecution, fines and imprisonment. The best chance you have of avoiding these penalties begins with hiring an experienced and knowledgeable criminal defense attorney.

When Does a False Statement Become Perjury?

For a statement to be considered perjury, it must meet a set of criteria. For example, you may make a statement in good faith that it is true when, in fact, it is false. In this case, you would not be guilty of perjury. If the government wanted to prosecute you for perjury, though, it must prove that the following conditions are met:

For the state to prosecute you for perjury, it must prove that your testimony was false. If your statement is true but merely misleading, the state does not have a case. However, per another section of the law, if you make two statements that contradict one another, the state may proceed with prosecution, as the law does not require it to prove that one statement is false; it must only prove that both cannot be true.

For an untruth to become perjury, you must have spoken willfully and knowingly. In other words, you must have been aware that you were under oath and made a false statement regardless. If there was any confusion about the meaning of the oath, or if, at the time, you believed your statement was true, you cannot be convicted of perjury.

Finally, a statement must be “material” for it to subject you to perjury. What this means is that it must, in some way, influence or have the potential to influence the decision-makers to whom it is addressed.

You can commit perjury anywhere, and not just in a courtroom. For example, a police officer may ask you to make a statement following a crime. They may record the statement and give you a copy to sign. At the end it may contain a statement about the declaration being made under the penalty of perjury. You can commit perjury by omitting income information on a tax document or by intentionally understating your income on a child support document.

What Is the Penalty for Committing Perjury?

Because committing perjury is essentially obstructing justice, state and federal governments take a harsh stance against it. Laws do vary across state lines. However, the crime is a felony in all 50 states. It comes with a possible prison term of up to one year, in addition to fines and probation. At a federal level, a person faces up to five years in prison and hefty fines.

Of course, lawmakers consider the degree to which the false statement obstructed justice when sentencing a perjurer. The penalties increase in relation to how greatly the false statement interfered with proceedings. Additionally, if you commit perjury in your own criminal case, the judge is likely to elongate your sentence. This is do to the fact that a defendant who lies is likely one who requires a lengthy rehabilitation.

Judges may also use their discretion in how to deal with perjurers who lie in an attempt to hide a crime or attempt to help a defendant get away with a crime. In this case, a judge may charge the perjurer as being an accessory to the crime in addition to perjury. If the perjurer is a defendant in a criminal case, and if he or she lies under oath to hide a crime, the judge may charge him or her with the initial crime, perjury and as an accessory to the crime.

What Are Defenses Against Perjury?

The best defense against perjury is to tell the truth, and nothing but the truth. However, you may have already lied under oath or face charges for doing so. If so, it is imperative that you contact a criminal defense attorney right away. They are familiar with the justice system and can help you craft a strong defense against the charges you face. The most viable defenses in the face of perjury charges are the following:

Recanting or Correcting Your Statement

A common tactic prosecutors use is to put someone on the stand who they know will lie. This person’s statement serves no other purpose than that. If you fell victim to the perjury trap, and if your statement had no relevance to the case, you may be able to claim “no materiality”. You do not want to go with the “perjury trap” defense, however, as the prosecutor didn’t force you to lie.

Statement Made in Good Faith

One of the strongest defenses is insisting that you made your statement in good faith that it was true, and that you did not intend to mislead or deceive.

If you were charged with perjury, your freedom and your reputation may be at stake. An experienced criminal defense attorney can help you build a robust defense and fight the accusations against you. Take the first step to defend your freedom and your honor. Submit a request online or call us today at (866) 345-6784 to get in touch with an experienced lawyer in your area!