Everything You Always Wanted To Know About Contracts and Their Breaches 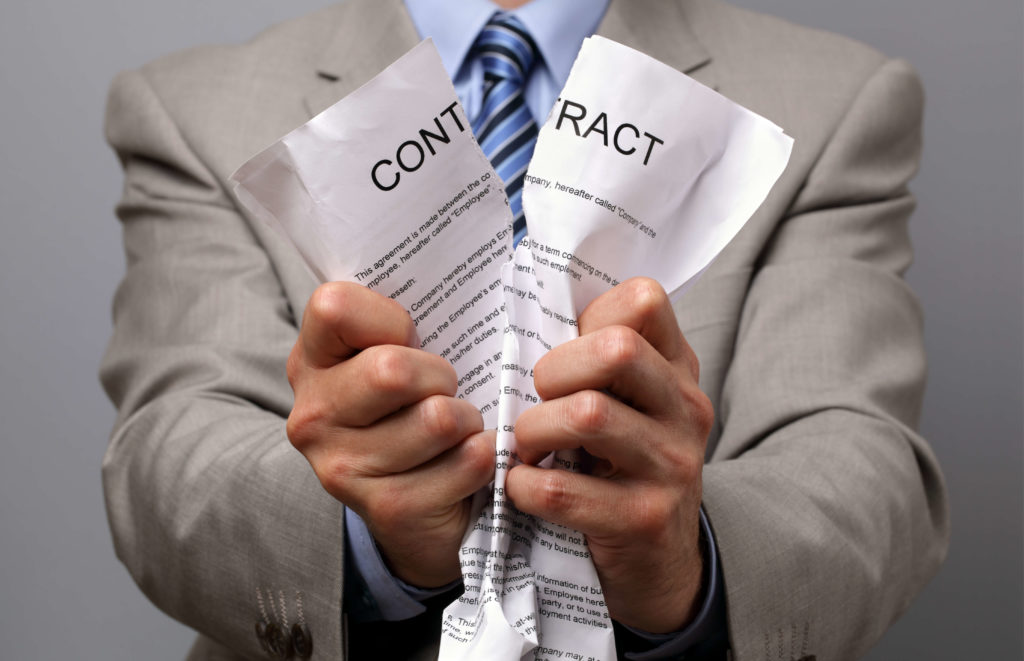 By definition, breach of contract means the violation of a contractual obligation. In other words, one party to the contract fails to live up to whatever was promised in the contract. Given that contracts make up a good portion of your life — especially if you are a business owner — the types of contracts you are involved in and the specific ways they can be breached are almost infinite.

A contract is a legally binding agreement between two or more people. Your best interests consist of always putting your deals in writing although contracts can also be oral. Why? Because you run less chance of misunderstanding between the parties and consequently have a better chance of enforcing the contract provisions or receiving damages or other court help if and when the other party breaches.

Common types of contracts include the following:

There is a myriad of specific ways in which someone can breach a contract. However, they tend to fall into the following six categories:

Contract breaches can be minor (immaterial) or substantial (material). In general, you can do little or nothing about an immaterial breach because it doesn’t affect you or your business all that much. Conversely, when the other party breaches the contract so severely that it defeats its whole purpose, this constitutes a material breach resulting in you or your company suffering substantial damage.

Factors that determine whether or not a breach by the other party is material include the following:

When the other party materially breaches one of your contracts, you can sue that person. Breach of contract represents a civil action, meaning that monetary damages and other civil remedies are the only things the court can give you if you prevail. In general, your breach of contract remedies consist of the following:

In the case of an anticipatory breach, you may petition the court for an injunction against the potentially breaching party to prevent him or her from following through with the anticipated breach.

The purpose of damages is to compensate you for what you have already lost and what you likely will lose in the future due to the breach. In other words, damages are supposed to “make you whole,” i.e., put you in the same position you would have been in had the contract not been breached.

Specific performance is an equitable form of relief wherein the court orders the defendant to perform his or her contractual obligations. Courts only order specific performance in cases where damages cannot be calculated or would not be adequate to make the plaintiff whole.

Rescission is another equitable remedy that allows a contractual party to cancel the contract, thereby putting both parties back in the positions there were in had there been no contract in the first place. You usually do not have to go to court in order to rescind most contracts. One rescission example is when you buy a new vehicle, and the dealer gives you three days (or whatever period) to bring it back if you decide you don’t want it.

Reformation is yet another equitable remedy wherein the court basically rewrites the contract if you can prove that the other party deceived you or that the agreement the two of you actually made is different from what the written contract states.

Why You Need an Attorney

You might think that breach of contract is a simple and straightforward matter. After all, either the other party lived up to his or her contractual obligations or didn’t do so. Unfortunately, you would think wrong.

Contract law is one of the most complicated areas of the law, full of twists and turns that even the most sophisticated layman cannot be expected to know or anticipate. For instance, did you know that contracts must contain specific elements to be valid? In addition, you can rest assured that when you sue someone for breach of contract, that party will come up with reasons, called defenses, for why the actions or inactions in question don’t amount to a violation. The defendant may even counter-sue you for claimed damages of his or her own.

Submit a request online today or call us at (866) 345-6784 to get in touch with an experienced contract attorney in your area.