What Is Tax Fraud? 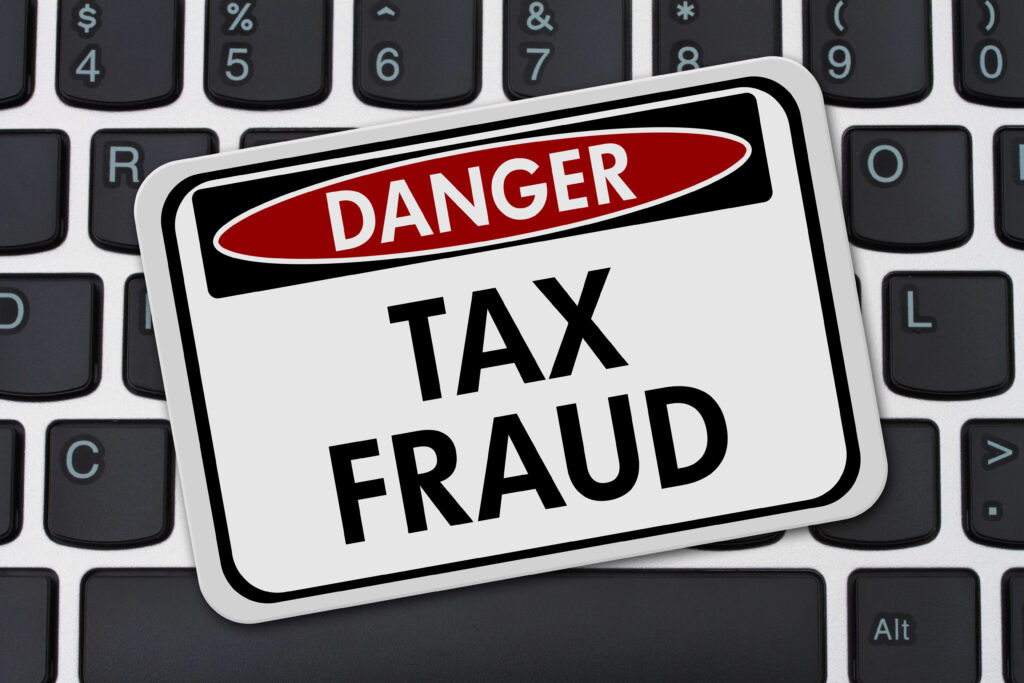 For some, filing state and federal taxes becomes a confusing and frustrating ordeal involving ever-changing laws and an ever-increasing tax bill. For others, tax season is an opportunity to intentionally falsify information to limit a tax bill, which is tax fraud. Instances of tax fraud include claiming personal exemptions as business exemptions, claiming erroneous deductions, intentionally neglecting to claim income, and using a fake Social Security number. Sometimes referred to as “tax evasion,” tax fraud requires an investigation by the IRS’s criminal investigation unit. Those accused of tax fraud should secure a tax lawyer’s professional aid.

Without the existence of the above, the IRS may determine that the error was an innocent oversight rather than a malicious attempt to break the law. Even then, a negligent mistake may result in an accuracy penalty that comes with a fee of 20% of the underpayment.

Indications of tax fraud for businesses include:

Individuals and business owners should leave their taxes to a professional accountant. That way, they reduce their chances of an innocent mistake raising red flags with the IRS.

What Is the Difference Between Tax Fraud and Tax Avoidance?

Avoiding taxes is not the same as evading them. Tax avoidance involves using legal means to reduce an individual’s or company’s tax liability. An example of such legal means is claiming credits and deductions. A company or person may also buy municipal bonds and prioritize other investments with tax advantages.

With tax fraud, a person may claim a tax exemption for a dependent who does not exist or use a secrecy jurisdiction such as an offshore tax haven. While depositing funds into foreign bank accounts is not illegal, the person or business must file all necessary reports to pay all necessary taxes and properly report wealth.

What Are the Consequences for Failing To Pay Taxes?

Not paying taxes is not always an indication of criminal activity. A person may lack the funds to pay taxes, not believe in paying taxes, or feel that the penalty for not paying taxes does not outweigh the cost of filing. The IRS helps those who have trouble paying their taxes in full, such as offering installment plans and negotiating settlements. The government does charge interest, fees, and penalties for neglecting to pay taxes in full on time. Generally, though, the IRS prefers to work with taxpayers to negotiate a deal rather than press criminal charges.

A person who would rather not deal with the IRS for not filing taxes may turn to a tax professional for assistance. Such specialists can help obtain past 1099s, W-2s, and 1098s. It helps to speed up the process if a person keeps meticulous tax files and records.

What Are Tax Evasion Penalties?

A person who evades paying taxes by failing to file more than 60 days after the due date may have to pay a fine of up to $250,000, even without being formally charged with tax evasion. The failure-to-file penalty exceeds the failure-to-pay penalty by 10 times. Taxpayers should file their taxes on time, even if they lack the financial means to pay them in full. The IRS would rather receive a partial payment rather than no payment at all.

Those who evade paying taxes can expect to incur interest fees on missed payments. Interest payments start from the tax return due date and continue until the person pays the tax bill in full, which includes all penalties and interest.

Because it is a felony criminal offense, tax evasion may result in criminal charges. Those found guilty of the crime could go to federal prison for as many as five years.

Those who receive Social Security benefits may lose 15% of their payments each month until they pay their tax debt. The Federal Payment Levy Program allows the government to garnish a taxpayer’s benefits.

Federal tax liens are another potential tax evasion penalty. Liens become automatic when a person fails to pay taxes within 10 days of the IRS making a tax assessment. Afterward, the agency mails a payment demand and notice of taxes owed. After activating the lien, releasing it is out of the IRS’s hands until the taxpayer pays all fees, penalties, and taxes associated with the lien. The claim also drops when the IRS can no longer legally collect the owed tax.

While leaving tax preparation to a professional is a great way to avoid innocent (yet costly) mistakes, some tax preparers are guilty of tax fraud. Taxpayers must check their preparer’s credentials using the IRS’s Directory of Federal Tax Return Preparers or CPA search tools. Another way to sidestep tax preparer fraud is to search for tax professionals experienced in a person’s specific financial needs, such as FBAR or FATCA filings.

Finally, taxpayers must speak up if they notice an issue (or potential) issue with their filing. It is not uncommon for the IRS to prosecute a criminal tax professional’s clients if those clients should have known the person filed a fraudulent return or had knowledge of the misdeed. Anyone who experiences financial exposure because of an opportunistic tax preparer’s crimes can file a complaint with the IRS.

Those charged with tax fraud or who suspect their tax preparer may be guilty of tax fraud should seek experienced legal representation. It is always a good idea to face the IRS with a knowledgeable advocate’s support. Submit a request online or call us today at (866) 345-6784 to get in touch with an experienced lawyer in your area!