Lane Splitting Could Put Everyone in Danger 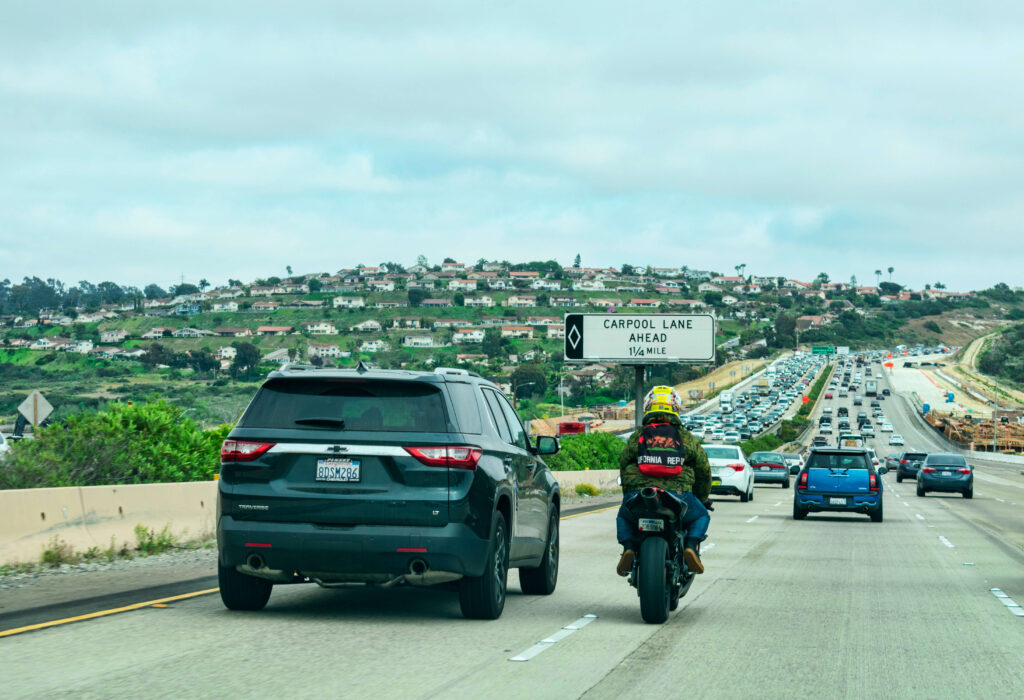 Motorcycles are one of the most vulnerable vehicles on the road because of their size. They are not as visible as other vehicles, making it easy to overlook them. While many motorcycle accidents are because a driver failed to yield to the rider, sometimes actions on the part of the biker are the cause. Darting in and out of traffic, speeding and lane splitting are common reasons for accidents due to biker actions.

Lane splitting is a highly debatable topic. Some believe it is beneficial and keeps bikers safer on the roads. Although, others feel it puts them and other drivers at risk.

If you were in an accident with a motorcycle and believe lane splitting was the cause, you may have the right to legal remedies, but because this topic is so confusing and controversial, you need an experienced personal injury lawyer to help you sort out your case.

Lane splitting is when a motorcycle moves between lanes or between vehicles in traffic. It occurs in traffic jams when other vehicles are moving slowly or at a stop. The motorcycle can then bypass the traffic and avoid getting stuck.

Lane splitting is not passing traffic between lanes when it is moving at a normal speed or close to normal speed. It is only for times when traffic is not moving quickly. The intention is to free up space and move more bikers off the roadway since they are more vulnerable to accidents in such situations.

Each state sets its own laws concerning its roads. Due to this, laws about lane splitting depend on which state you are in. The only state that has fully legalized lane splitting in California. However, other states have varying degrees of acceptance for the practice.

Most states do not have specific laws that ban the practice. However, they also have restrictions that make it not a completely legal maneuver. Some states do have outright bans.

As mentioned, California is the only state where it is explicitly legal. The law in this state leaves final judgment to the California Highway Patrol. They monitor lane splitting and determine when it crosses the line into an unsafe act.

Arizona, Connecticut, Oregon, Virginia and Washington are some states actively pursuing laws that would legalize lane splitting. Other states, such as Hawaii, have laws that prohibit it due to safety concerns. In Hawaii, lanes on roadways are too narrow for a motorcycle to safely pass other vehicles in this manner. Some states, including Utah, have legalized other similar maneuvers but still outlaw lane splitting over safety concerns.

Motorcycle groups and riders are strongly for the legalization of lane splitting, and they have plenty of support. Many lawmakers and experts feel the same.

They state that this helps reduce traffic congestion. One study showed accidents due to lane splitting result in less serious injuries than other types of motorcycle accidents, which supporters use as evidence that it increases rider safety. They also note that it removes motorcycles from dangerous spots within traffic, which can save lives.

Formal opinions are that lane splitting does seem to be effective as a safeguard for riders if done at speeds of less than 50 mph. When passing other vehicles, a motorcycle should never go more than 15 mph faster than the other vehicles. In other conditions, though, it could prove harmful.

This is an argument of opponents. They feel riders will not obey the restrictions and put themselves and others at a greater risk for an accident. Those in opposition also feel that lane splitting causes an unnecessary burden on motorists who now have to watch out for motorcycles traveling outside of the normal traffic pattern.

Perhaps the biggest concern about lane splitting is that it can lead to accidents if drivers do not see the motorcycle or if the bike rider is not following safety guidelines when doing the maneuver. It is essential to follow the guidelines for not going more than 15 mph faster than other drivers to prevent startling them and making them react in ways that could put the motorcycle in harm’s way.

Lane splitting is only safe when done in accordance with the law. If a state fully prohibits it, then there is no safe way to practice the maneuver. Any accident caused due to it causes liability for the motorcycle rider.

Even when done in accordance with the law, it still is risky if everyone on the road is not paying attention. Motorists must know to watch out for motorcycles traveling between lanes. This is why doing it in any state but California is risky. Since it is not legal in other states, motorists may startle when a biker does it or not be aware and merge into a motorcycle trying the maneuver.

Attorney Assistance With Accidents Due to Lane Splitting

If you are a motorcyclist, you may find you need an attorney if lane splitting may have led to your accident. It is essential that you learn the law in your state so that you can avoid such a situation. Your attorney can advise you about the law and help you formulate a defense. You will have to show that you were not at fault in many cases to avoid liability.

If you are a driver who got into an accident due to a motorcycle illegally practicing lane splitting, you also may need legal help. Your attorney can assess the incident and help develop your case to prove that the illegal act of lane splitting led to the accident.

Even if you are in California, you may need the assistance of a lawyer who can help you navigate the confusing aspects of the law to show you were within the law by lane splitting or to prove a motorcycle was outside the scope of the law.

Regardless of your situation, if you were in an accident and lane splitting was a factor, you need to seek competent legal counsel. Submit a request online or call us today at (866) 345-6784 to get in touch with an experienced lawyer in your area!